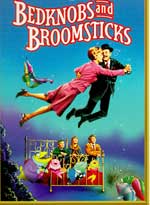 Buena Vista Home Entertainment is preparing a nice DVD presentation of the Disney favorite, Bedknobs and Broomsticks (1971) for this coming March.

Though we don’t yet have details on the picture and sound, we do know that plans are to restore the film to its original length, which includes 3 deleted songs. Production stills are also planned for the disc.

‘Bedknobs and Broomsticks’ is scheduled for release on March 20th. It will carry a suggested retail price of $29.99.