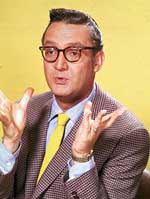 Spokesman Kevin Sasaki said Allen died of an apparent heart attack while napping on Monday night at the home of his youngest son Bill in the Los Angeles suburb of Encino after carving pumpkins with his grandchildren.

Once called television’s ‘Man for All Seasons,’ Allen was celebrated for his quick wit, horn-rimmed glasses and song-writing skills that saw him compose 8,500 tunes. The Guinness Book of World Records called him the ‘most prolific composer of modern times’ and among his songs were ‘Impossible,’ ‘This Could Be The Start Of Something Big,’ the theme from ‘Picnic’ and the Grammy-winning ‘Gravy Waltz.’

‘The Tonight Show’ began as ‘Tonight’ on the New York NBC station WNBT, then moved to the network on Sept. 27, 1954. As a result of his work on the show, many credit him with creating the television talk show. Johnny Carson said in a statement, ‘Steve Allen’s death saddens me greatly. All of us who have hosted the Tonight Show format owe a debt of gratitude to Steve Allen. He was a most creative innovator and brilliant entertainer.’

After leaving ‘The Tonight Show’ in 1956 Allen concentrated on prime-time television, where he hosted a variety show that went up against the Ed Sullivan show and lost. He left NBC for ABC in 1960 but never quite regained the superstardom he had on television in the 1950s.

Allen, who was born Stephen Valentine Patrick William Allen in New York City on Dec. 26, 1921 to a show business couple, starred as jazz clarinetist Benny Goodman in the popular film The Benny Goodman Story in 1956. He also appeared in such films as The Comic in 1969 and Casino in 1995.

Tall, broad-shouldered and famed for an owlish look enhanced by his thick, horn-rimmed glasses, Allen once said, ‘One of the secrets of my success, if you can call it that, is that I don’t waste any time. If they invented a nine-day week I would work nine days a week.’

Known for his nonstop inventiveness, the veteran entertainer was never without a small tape recorder that he carried everywhere, frequently dictating notes to himself with ideas for his next song, joke or book project.

He wrote 40 books, plus poetry, philosophy, songs, newspaper columns and the Broadway revue ‘Seymour Glick is Alive but Sick.’ He was once described by his friend, singer Andy Williams, as ‘the only man I know who is listed in every one of the Yellow Pages.’

Allen is survived by his wife of 46 years, actress Jayne Meadows, four sons and 11 grandchildren.

We can only wish him the same prolific success in the afterlife that he enjoyed while alive.