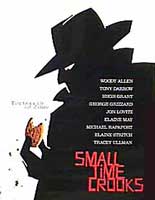 We’ve just received word that DreamWorks is preparing the DVD for Woody Allen’s most recent film, Small Time Crooks for a December release.

The movie gave Mr. Allen his biggest opening weekend at the box office and was something of a return to an older style of comedy for the sake of laughs for the respected filmmaker. It was written and directed by Woody Allen (but you knew that), and stars Allen, Hugh Grant, Tracey Ullman and Jon Lovitz.

No information yet on the picture and sound (though we don’t expect a Dolby Digital 5.1 soundtrack as Allen general eschews aggressive sound mixes), but we do know that the disc will include cast and crew biographies and production notes.

Small Time Crooks is scheduled for release on December 19th. The suggested retail price will be $26.99.