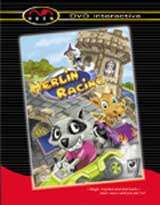 DVD International will release the first wave of NUON-enhanced DVD games this November with Tempest 3000, Merlin Racing, and Freefall 3050 A.D. These discs are designed specifically for DVD players bearing the Nuon logo, which at this point includes the Toshiba SD 2300 and the Samsung Extiva DVD-N2000 DVD (see the review of this player in our new Hardware section!)

Here’s a quick summary of each game:

Way back in 1981, the original “Tempest” was introduced and immediately became a classic. Now, almost twenty years later, “Tempest” is back and looking better than ever! “Tempest 3000” is best described as a fusion of modern music and psychedelic visuals with a generous dollop of old school, thumb-blistering, button smashing, gameplay. From renowned digital artist Jeff Minter, comes a remake of one of this addicting game. New and improved weapons. All original Tempest enemies, plus many new ones as well. Cool Techo soundtrack. Single Player.

An evil witch has captured Merlin the Magician and echanted Camelot. You must help King Arthur by defeating the witch’s minions at their own game. “Merlin Racing” features a wide variety of races, vehicles and cute cuddly characters to choose from. Strap on your helmet, put the petal to the metal, and remember, only the best of the best can hope to save Camelot. Ten cute and cuddly characters from which to choose. More than 25 unique tracks in a variety of settings. Three different types of vehicles; mini-karts, swamp-buggies, and futuristic hover crafts (all of which, apparently, help immerse players in a true Knights of the Roundtable feel). Bonus items such as, grenades, rockets and turbo-boosts. One or two player.

The year is 3050 and you are a cop on the beat. The hot pursuit is in full force, so grab your vest, your gun, and leap head first out the window! “Freefall 3050 A.D.” is a fast paced action game featuring the unique combination of freefalling through space while blasting bad guys into oblivion! Rotate in 360 degree spins while plummet at neck breaking speeds. This is not your typical shoot’em up game. Distinctly original and exhilarating new style of gameplay spin and shoot in 360 degree while freefalling through space. Cool Futuristic weaponry and gadgets. A variety of unique and wicked enemies. Single Player.

All 3 discs will be released on November 14th and will carry a suggested retail price of $29.99.