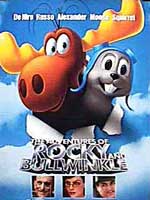 We’ve gotten some fresh-off-the-presses information from the folks at Universal Home Video today, regarding a couple of their January DVD releases. Though we don’t yet have all the pertinent information regarding each disc, we thought we’d give you an idea of some of the things you can expect to see after the holiday season wends down…

The Adventures of Rocky and Bullwinkle

Bonus features will include a spotlight on location featurette, production notes, and cast & filmmaker bios.

Bring It On (Collector’s Edition)

A champion high school cheerleading squad discovers its previous captain stole all their best routines from an inner-city school and must scramble to compete at this year’s championships.

Bonus features will include a ‘making of’ featurette, audio commentary with director Peyton Reed, deleted & extended scenes, never-before-seen home movies of the car wash scene, wardrobe and makeup tests, ‘Did you Know That?’ Universal animated anecdotes, Blaque ‘As If’ music video, theatrical trailers, DVD-ROM features, including: a screen saver and a cheer quiz.

Both ‘Bring it On’ and ‘The Adventures of Rocky and Bullwinkle’ are scheduled for release on January 23rd and will have a suggested retail price of $26.98.