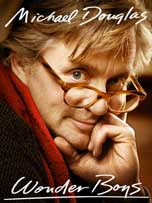 Directed by Hanson (L.A. Confidential), this is the story of an author (Michael Douglas) of a wildly successful novel who is trying to write another but is struggling with the success of his past and the weight of his future. The movie also stars Tobey Maguire and Frances McDormand.

Paramount will present the movie in an enhanced widescreen transfer letterboxed at 2.35:1, with Dolby Digital 5.1 and French Surround tracks, as well as English subtitles. Bonus features will include exclusive interviews with Douglas, Maguire, Frances McDormand and director Curtis Hanson. Also—similar to what was done with “L.A. Confidential”—an interactive map showing the Pittsburgh locations used for shooting will include commentary by Hanson. Also included will be a featurette on the singers and songwriters featured in the movie, a soundtrack pictorial, the music video for Bob Dylan’s “Things Have Changed” and a featurette on Dylan.

‘Wonder Boys (Special Edition)’ has a release date of January 9th. It will carry a suggested retail price of $29.99.