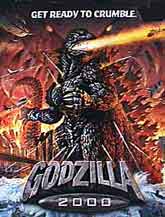 This seems to be the week of oversized reptilian beasts…

Columbia Tri-Star Home Video is bringing Godzilla 2000 to DVD in December (actually no one brings Godzilla anywhere…but he will be arriving).

Both discs will be feature 16X9-enhanced widescreen transfers. Bonus features will include a commentary from editor Michael Mahoney, Supervising Sound Editor Darren Paskal and Sony Pictures Releasing Executive Michael Schlessinger on the English version, as well as behind-the-scenes special effects footage, theatrical trailers, bios (including one of Godzilla!) and production notes.

The discs are scheduled for release on December 26th. They’ll carry a suggested retail price of $24.95.