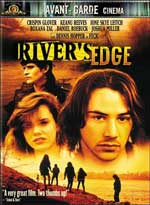 A film that many people have been waiting for is finally coming to DVD courtesy of MGM: River’s Edge.

Considered by many to one of the key films of the 80s, this is a disturbing look at how desensitized subsequent generations have become to violence.

A teenager kills a young woman while on a date and the film examines the reactions to the murder by his group of friends. One sees the act as a rallying point and wishes to protect the young man from the police while others in the group are more fractious in their views.

MGM will present ‘River’s Edge’ in a widescreen edition, enhanced for 16×9 TVs. No word yet on the soundtrack, but there will be French and Spanish subtitles available, as well as a trailer.

The movie is set for release on January 23rd. The suggested retail price will be $19.98.