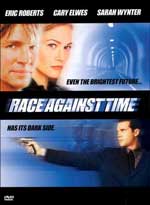 Warner Home Video will take you on a breathless journey to save your body in the DVD of TNT’s original movie, Race Against Time.

Need Cash in a hurry? Lifecorps will give you a bundle today in exchange for the rights to harvest your organs tomorrow. Once you sign on the dotted line, Lifecorps’ storm troopers will never try to collect early on the deal.. Or will they? When our protagonist faces surmounting bills for his dying son’s hospital stay, he enters into an agreement to sell his own body for organ transplants to pay his debt. The film takes a dramatic turn when he is advised that the doctors want to claim his organs immediately and he is forced to go on the run.

This exciting sci-fi thriller, directed by Geoff Murphy, and starring Eric Roberts, Cary Elwes, and Chris Sarandon, was a huge hit on the cable channel, bringing in some of the station’s largest viewership numbers to date.

Warners will present ‘Race Against Time’ in an anamorphic widescreen transfer, letterboxed at 1.66:1. Bonus features include two behind-the-scenes featurettes on the story and the effects, cast profiles, and English and French subtitles.

The disc is scheduled to hit the streets on December 26th, with a suggested retail price of $19.98.