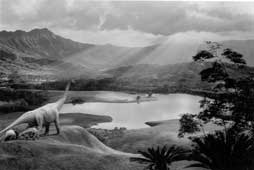 Walt Disney Pictures is bringing Dinosaur, the most expensive animated feature ever made, to DVD this January, and it looks like they’ve throw in everything but the kitchen sink.

Set 65 million years ago during the late Cretaceous Period, ‘Dinosaur’ follows the adventures of an Iguanodon named Aladar (D.B. Sweeney), who is separated from his own species and raised on an island paradise by a clan of Lemurs, including Plio (Alfre Woodard), and Yar (Ossie Davis’). When a devastating meteor shower plunges their world into chaos, Aladar and several members of his Lemur family escape to the mainland and join a group of migrating dinosaurs desperately searching for safe nesting grounds. The herd faces many obstacles during their treacherous trek, as they cross a waterless desert trying to outrun a group of bloodthirsty Carnotaur predators.

‘Dinosaur’ is being offered as both a Standard Edition DVD and as a special 2-disc Collector’s Edition DVD. Both feature a digital transfer created directly from the digital source, ensuring an optimal presentation that, according to Disney, actually surpasses the Theatrical experience. Both editions have been THX Certified with THX Optimode for the ultimate in sound quality.

Here are the features of each:

The release date for these babies is January 30th, with a suggested retail price of $29.99 for the Standard Edition and $39.99 for the Deluxe Edition.