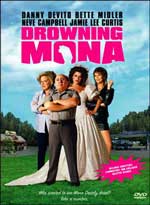 Columbia Tristar Home Video wants to give DVD fans an after-holiday gift by reducing the price of two of their recent titles.

On January 9th, the studio will lower the suggested retail price of both What Planet Are You From? and Drowning Mona.

‘What Planet Are You From?’ stars Gary Shandling as an alien sent to earth to procreate with a woman in order to save his planet. Naturally, he has trouble understanding the opposite sex (most humans do, how could an alien be expected to do otherwise?), and wackiness ensues.

‘Drowning Mona’ is a dark comedy starring Bette Midler as a town resident who is so nasty that her death is considered a fortuitous accident for everyone who’s lives she has touched. When her death appears to be no accident, the Chief of Police, (Danny DeVito) runs into a real problem in discovering her murder: anyone and everyone could have done it.

With online sales the way they are, this means that you should be able to pick up either of these titles so cheaply that the retailer will actually owe you money for your purchase…

All right…maybe not quite that cheap, but you’ve got to love a ten dollar drop in price!