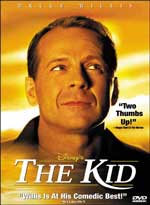 Buena Vista Home Video is getting ready to fulfill middle-age regret fantasies when they bring Disney’s The Kid to DVD in January.

Russ Doritz (Bruce Willis) is a successful, but unhappy image consultant who magically meets himself as an eight-year-old boy and doesn’t like what he sees. With the help of the boy, Russ gets in touch with his childhood dreams.

The disc will come with an enhanced widescreen transfer of the movie, letterboxed at 1.85:1. Audio will be a Dolby Digital 5.1 surround track. Bonus features include an audio commentary, a ‘making of’ featurette, interviews, and the film’s theatrical trailer.

‘The Kid’ is scheduled to hit the shelves, both solid and virtual, on January 16th. It will have a suggested retail price of $29.99.