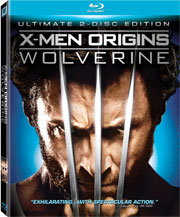 A lot of information and rumors have been floating around the Internet for the past weeks regarding 20th Century Fox Home Entertainment’s upcoming release of X-Men. To make sure we have the definite information on the title, in all accuracy and without errors, we have double-checked with 20th Century Fox Home Entertainment, and we are no wable to birng you the exact details of this highly anticipated release.

As announced earlier, the DVD is scheduled for release on November 21. The DVD will contain the movie’s theatrical cut in 2.35:1 anamorphic widescreen and come with a 5.1 channel Dolby Digital audio track, as well as English and French Dolby Surround tracks. Although a DTS audio track had been planned for the release, these plans have been scrapped today, as it turned out that the DTS audio track would severely affect the video quality of the presentation. According to Fox representatives, especially the dark scenes of the film suffered quite bit from the datarate reduction that would have been necessary to accommodate a DTS track. Regrettably, the transfer would lose detail and blacks were fading out, especially in scenes like the cage fight scene with Wolverine. As a result there will be no DTS audio track on the disc and for a number of internal reasons 20th Century Fox Home Entertainment has no plans to make a separate DTS version available at any time in the foreseeable future.

But there’s good news, too. Six deleted scenes will be on the DVD with a total running time of 10 minutes. Like the “White Rabbit” feature on Warner’s “The Matrix”, these scenes can be seen in the context of the movie. Upon request, an “X” will appear in the lower right corner of the screen whenever a deleted scenes is available and the viewer can then manually switch over to see that particular scene, and go back to continue watching the movie once it is finished. Of course these scenes will also be accessible in a sequential form through a different menu. The deleted scenes cover mostly character development, and feature Halle Barry and some additional Wolverine material. Even Spiderman will definitely make his appearance on the disc – how and where remains to be seen however!

A series of Animatics is also part of the disc, computer generated pre-visualizations that helped director Bryan Singer to compose his shots. These Animatics include the fight between Sabretooth and Wolverine on the Statue of Liberty. It will be interesting to compare these previz shots to the final movie, especially since much of the facial expression has reportedly been converted almost identically.

“Mutant Watch,” a 30-minute documentary about the film that aired on Fox earlier this year will also be on the disc. On top of that, excerpts of director Bryan Singer on “The Charlie Rose Show” will also be on the disc, in which Singer talks about why he did the movie, what it was like to work with some of the actors and the studio.

The DVD is rounded out with an extensive photo gallery that features production stills, sketches, and character development graphics. The hottest aspect of this gallery will be that it includes designs for characters that did not make it into the movie but were designed with full costumes o see if they would work within the context of the movie.

There you have it. All the facts about the upcoming X-Men DVD. Excited already?