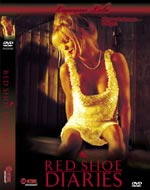 Each disc contains three episodes which are letterboxed at 1.85:1. Extras include: screenplays, filmographies, a photo gallery of seductive images, original diaries, and a ‘sexy’ behind-the-scenes sneak peek (hmmm, that one’s interestingly ambiguous…)

The release date for both discs is November 14th, and they will carry a suggested retail price of $24.98 each.