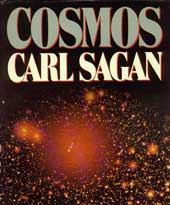 One of the most awe-inspiring TV series ever produced, Cosmos will finally make its long-awaited appearance on DVD as a Collector’s Edition boxed set, courtesy of Cosmos Studios.

‘Cosmos’ is the story of how the human species came to establish its coordinates in space and time. A seamless blend of solid intellectual content combined with potent emotional and spiritual uplift, ‘Cosmos’ was a global phenomenon that transcended every conceivable demographic. Some 600 million people in more than 60 countries have seen the show since it originally aired 20 years ago — making it arguably the most popular science program ever produced. This vast international audience can now let their children experience the inspiration of ‘Cosmos’ — and impressively, after twenty of the most eventful years in the history of science, it requires virtually no revisions and has proven to be strikingly prophetic.

Cosmos Studio presents ‘The Collector’s Edition of Cosmos’ in a digitally restored and enhanced version of the original thirteen hours on 7 discs. It contains updates by Carl Sagan and Ann Druyan as well as science bulletins and an array of new astronomical images. Keeping its attention on the international audience, the new edition is playable on any DVD player on earth. It contains seven different subtitle language selections (French, Italian, German, Spanish, Mandarin, Japanese, English for the hearing impaired) and features newly re-mixed Dolby Digital 5.1 Surround audio. The DVD also contains a Dolby Digital Music and Effects track.

Cosmos Studios plans to have Cosmos available sometime in November. The suggested retail price is $169.95.