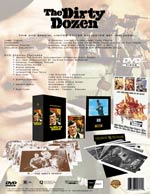 Herb Dorfman, President of Steeplechase Entertainment Corporation, exclusive North American Sales Agent for Creative Design Art, Inc. said ‘We have experienced a wonderful reception from both the home video industry and the retail market with our past releases–The Matrix, Casablanca, Blade Runner, Twister and Blazing Saddles–and we are optimistic about our fall series.’

‘We search all over the world to find different items.’ William Gardner, Executive Marketing Director of CDA explains. ‘Our newest addition is the ”Exclusive Collection“ which are 6 original black and white photograph stills from the movie and promises to delight even the most skeptical fan”.

These Box sets contain the standard edition DVDs with a plethora of extras that include lobby cards, one-sheets, black & white photos and posters. They carry a suggested retail price of $79.98.