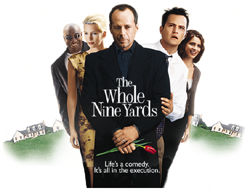 As we had reported earlier, Warner Home Video is preparing the release of The Whole Nine Yards on July 18. Today, finally more details about the comedy came in so we thought we’d give you a brief update. The hit comedy which was the No. 1 movie in America for three straight weeks. It will be available for rent on video and for sale on DVD at the suggested retail price of $24.98.

The movie about life, love and plenty of ammunition tells the story of Nicholas “Oz” Oseransky, an all-around-nice dentist living in suburban Montreal. His new next-door neighbor, Jimmy “The Tulip” Tudeski, is a hit man hiding out from a dangerous Chicago crime family. Despite their differences, Oz and Jimmy have one thing in common: someone’s trying to kill them both. For Jimmy, avoiding a couple of hired killers is child’s play. But for Oz, it’s a whole new ball game. To stay alive, they’re going to have to stick together.

Written by Mitchell Kapner, “The Whole Nine Yards” was produced by David Willis and Allan Kaufman, and executive produced by Elie Samaha and Andrew Stevens.