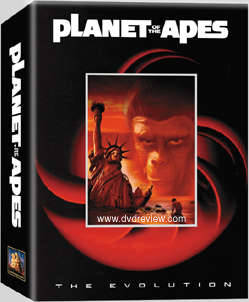 A little while ago we have brought you the full details of the upcoming release of the Planet Of The Apes series on DVD through 20th Century Fox Home Entertainment. Scheduled for release as a 6-disc box set on August 15, the set will contain THX certified widescreen versions of all five movies, plus an additional sixth disc, filled with the critically acclaimed documentary, Behind The Planets Of The Apes hosted by Roddy McDowall, featuring cast and crew interviews, behind-the-scenes footage, rarely seen screen tests, rare stills, concept art and storyboards from all five of the movies.

Called Planet Of The Apes: The Evolution this 6-disc box set will be limited to 150.000 copies. Today, we are proud to bring you the packaging artwork for this exciting release, as you can see on the side. Very stylish, isn’t it?