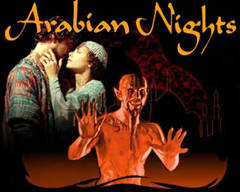 If you have missed Hallmark Entertainment’s outstanding min-series Arabian Nights that aired on the ABC network earlier this week – especially if you have been hit by the Time Warner / Disney clash which resulted in Time Warner dropping the ABC network from its cable on those days – you will be pleased to hear that Artisan Entertainment has just announced the DVD for the film.

Starring Milli Avital, Jason Scott Lee, John Leguizamo and Alan Bates, “Arabian Nights” is a beautifully crafted movie with dazzling special effects that eloquently retells the magical story of “1001 Nights.” See the tales like “Ali Baba and the Forty Thieves” come to life, or behold Aladdin change his life with the help of a Magic Lamp, only to win over the love of his life. Other exciting stories, as well as the original backstory of the book featuring Sheherazade as the master storyteller, have been woven into this made-for-television masterpiece.

Scheduled for release on July 18, the DVD will contain the entire 175 minute version of the film, uninterrupted of course, as well as a “Making Of Documentary” for the film. The disc will carry a suggested retail price of 19.98, which will make escaping into the magical realms of Sheherazade’s stories even more attractive!

Artisan Entertainment has also announced the thriller The Ninth Gate for release on July 18, featuring a 16×9 transfer, a commentary track and a Featurette. “The Ninth Gate” is Roman Polanski’s latest thriller starring Johnny Depp, who is hired to locate the last remaining copies of a demonic manuscript which can summon the devil.