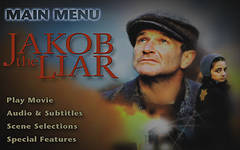 On March 21, Columbia TriStar Home Video will release the touching film by Peter Kassovitz, Jakob The Liar on DVD. Starring Robin Williams, the movie tells the story of poor Jewish cafe owner, Jakob Heym, in Nazi-occupied Poland during World War II. Jakob overhears a forbidden radio news bulletin signalling Soviet military successes against German forces. To combat the overwhelming depression that pervades the ghetto, Jacob invents fictious news bulletins about Allied advances against the Nazis. These lies keep hope and humor alive among the ghetto inhabitants – spirits are lifted, hearts are refreshed and optimism is reborn. The Germans learn of the mythical radio and begin a search for the resistance hero who dares operate it.

The DVD will contain a 16×9 widescreen transfer, a commentary track by director Peter Kassovitz, the film’s isolated music score and production notes. Today already, we are able to present you a close look at the menu screens from this upcoming release that will certainly move your heart too when it hits the streets on March 21. Please click here or on the image to the left for a close-up look at the menus that we have prepared for you.