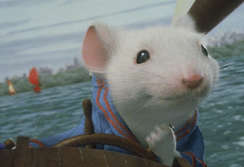 As we had mentioned earlier already, Columbia TriStar is readying Stuart Little for release on DVD. On April 18, the small computer-generated mouse will start its trip into the human world.

Stuart is a mouse like no other. When the Littles decide to adopt outside their species, they learn that love is not based on the size of your heart. The disc will contain a 16×9 enhanced widescreen version and a 5.1 Dolby Digital track.

The disc will also contain a large number of supplements, such as a commentary track by director Rob Minkoff, as well as the movie’s animation supervisor and effects supervisor, the HBO Special “Making It Big” as well as a Visual effects “Making Of” Documentary. You will also find deleted scenes, bloopers, a music video, games, conceptual comparisons, screen tests, the isolated music score and a large number of other supplements on this release.