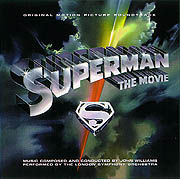 Some news come in from the folks over at Sharpline Arts. Although not exactly DVD related, I am sure this piece of information will get many movie fans excited. Apart from preparing Laserdisc and DVD Special Editions and contributing their material to a number of releases, Sharpline Arts is indeed a full audio and video production company. Recently they have been working on a soundtrack audio CD from Superman: The Movie. Long awaited, executive producer and creative director, Michael Matessino, compiled and edited the music score of the film from multiple source materials and provided the extensive collector’s material for this Rhino Records release that will be released on February 15. Next week already you will be able to download a streaming audio sample of one of the previously unreleased cues from the CD and a production journal from the project from their website, so make sure to stop by there next week and take a peek.