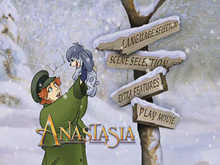 We have been able to get some screenshots of the disc’s menus for you to enjoy and get in the right mood for these splendid films. Please click here or on the image to the left for a closer look at a selcetion of menus form these releases.