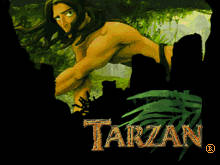 The release will feature a number of extras, including a never-before-seen recording session by Phil Collins and guests, a Read-Along, a Trivia Game, various sneak peeks and many other features, as well as DVD-ROM accessible Internet links. The disc will carry a suggested retail price of $39.99, just like Disney’s other animated feature films.

In addition to the standard DVD, a Tarzan Collector’s Edition DVD, will also premiere on March 21, carrying a suggested retail price of $49.99. It will include an additional audio

Disney is also premiering another animated film on February 29 with An Extremely Goofy Movie for $29.99. Starring everyone’s favorite “Goofs,” Goofy and his son Max find themselves attending college together in an all-new, hip and hilarious adventure that features exciting extreme sports action, high-energy music.