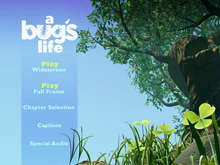 We have just received a large number of menu screens from the upcoming Deluxe Edition of A Bug’s Life from Buena Vista Home Video. As you can see from these menu screens, this release will be loaded with extras and supplements that will make every fan of the movie jump up and down in joy.

Please click here or on the image to the left so that we can take you to the page where we have prepared these menu screenshots for your viewing pleasure.

This 2-disc Deluxe Edition of “A Bug’s Life” will contain the film’s fullscreen version as well as a 16×9 enhanced widescreen version, together with an audio commentary featuring

This “A Bug’s Life” Deluxe Edition will be released on November 23 at a suggested retail price of $49.95.