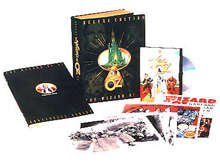 60 years ago, on August 15 1939, one of the best family films of all time opened at the Loew’s Capitol Theatre on Broadway, The Wizard Of Oz. Directed by Victor Fleming, who had also directed “Gone With The Wind”, the film’s Dorothy was played by a little girl qho would quickly become one of the world’s greatest entertainers, Judy Garland.

To celebrate the 60th Anniversary of the film, Warner Home Video is preparing a special edition of the film for release on DVD on October 19.

As we had reported from the VSDA showfloor earlier this year already, the DVD will contain the digitally restored film with a new 5.1 Dolby Digital soundtrack, as well as the

Like with a number of other recent Warner releases, there will also be a Deluxe Collector’s Edition available that includes a reproduction of the original script, rare prints of still photos, color theatrical poster reproductions, all wrapped up in a deluxe gift box. Please see the picture above. But we also have a menu screenshot from this upcoming release for you. Please click here to take a look at the disc’s main menu, and if you are still interested in more information, details or photos, stop by Warner’s Official The Wizard Of Oz Website which has opened its doors recently.