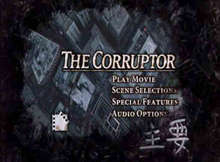 New Line Home Video’s The Corruptor is hitting DVD hard on September 14. It is a gritty cop thriller where a group of agents in the Chinatown district have to deal with the dangers of their everyday lives on the streets among gangs and mobsters. Starring Hong Kong superstar Chow Yun-Fat and Mark Walberg, this film by director James Foley is fast and furious, and will have you sitting on the edge of your seat.

Coming as a New Line Platinum Edition, The Corruptor includes a number of extras, such as a commentary track by director Foley – with a good rant against the MPAA rating system that forced him to tone down the gunplay and violence in the film a good deal.

Now, we have been able to get screenshots of the menuscreens from the release for your viewing pleasure. Of course we will also bring a full review of this great film to you within the next days, just in time for its release!