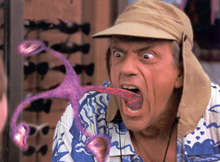 On September 28, Buena Vista Home Video will let My Favorite Martian loose on DVD enthusiasts across the country. Starring Jeff Daniels, Christopher Lloyd, Elizabeth Hurley and Daryl Hannah, “My Favorite Martian” is a hilarious comedy based on a classic television series.

Ambitious television reporter Tim O’Hara stumbles upon a martian whose spaceship has accidentally crash-landed on Earth. Thinking this is the story of the millennium and his ticket to a Pulitzer Prize, Tim makes plans to expose the martian, who, posing as Tim’s Uncle Martin, takes human form and has plans of his own. Obviously, Uncle Martin doesn’t want to be identified.

We now received the menu screens from the release and we have prepared them on this page for your viewing pleasure.