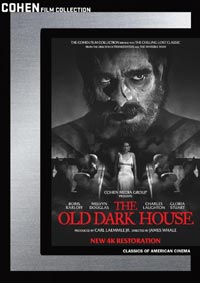 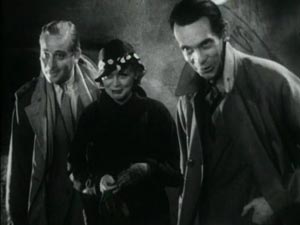 Certain classic movies have a reputation that is larger than the actual film. If a film has been rarely seen and has, perhaps, been considered lost for long times, its reputation can easily take on enormous proportions. Case in point, James Whale’s 1932 film The Old Dark House

I had heard and read much about the film in the past, heard about its status on the brink of extinction. Although prints of the film had been available in Europe after World War II, the movie had to be considered lost to US audiences until 1968, at which point director Curtis Harrington, a friend of the late James Whale, made it his personal mission to uncover the film’s negative from Universal’s extensive film vaults where it had sat derelict, abandoned and forgotten since Universal’s rights to the movie had expired and the studio no longer had any commercial interest in it. It took the director a lot of effort to physically locate the negative and then have it completely restored by the Eastman House, a subsidiary of Kodak Eastman that is specialized in restoring deteriorated films. In the early 1970s finally, James Whale’s The Old Dark House had come back to life, fully restored, and was presented to US audiences for the first time in decades. 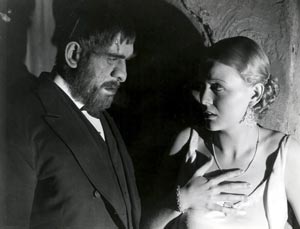 Over those years of dereliction, the picture had taken on an almost mythical reputation as Whale’s ultimate work—which in itself was notable because eclipsing Whale’s The Bride of Frankenstein would be no easy feat. But film fans and critics alike had long been enthralled by the beautiful still photographs that were circulating, and the ominously lit pictures of its marquee star, Boris Karloff. And so, the film continued to be regarded as one of the greatest gothic horror films ever.

As a direct result, The Old Dark House will undoubtedly disappoint many viewers who see it for the first time. Not because it is a bad film—far from it—but because it is very different from what those cherished still images suggested. You will not find Boris Karloff as the menacingly looming monster as suggested by the stills, and there is nothing truly shocking about the film. Upon a repeat viewing, however, the film will start to work its magic as emanates a beauty that is almost unparalleled by any other gothic horror film. Without the expectancy in the way, of horrific things to happen, the viewer finally has the time to enjoy the movie’s magnificent atmosphere and imagery, take them in and behold their artistic and stylistic beauty. It is what makes it stand out. 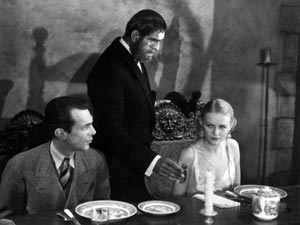 During a vehement rainstorm, five people are stranded at an ominous old house and have to share the night with the weird and eccentric owners. Each of the characters in the film is clearly defined and each one has its edges that we learn to see as the night progresses. The characters are the central focus of the film, and for emphasis, Whale stages the film almost entirely like a theater piece. Most of the movie takes place in one room where actors have their dramatic entrances and exits, including the extreme close-ups when they enter the screen for the first time—an unwritten law at the time. Carefully constructed, Whale presents the characters and when, at last, the film’s most anticipated character enters the stage during the film’s finale, he does so in the most dramatic fashion, to an almost empty stage for the greatest possible effect.

The Old Dark House is a very aesthetic and cinematic film and every picture, every camera angle, every light has been placed and chosen with distinct purpose. The smooth camera moves are elaborate and clearly designed to get the most out of the limited sets. Every shot has been carefully framed and it is remarkable how Whale made use of the film’s budget to create something that looks and feels larger than life by actually showing less—but in a very specific way. Take the titular old dark house for example. Whale stays away from using it as the visual element of evil and shows us the complete house in only one single shot, for a very brief moment. Long enough to set the stage for the film’s morbid setting, but not long enough to make it a presence. 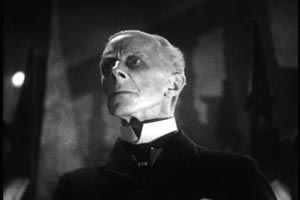 The Old Dark House is clearly one of the best films of its genre, eclipsing films like “The Cat and the Canary” or any other of the early haunted house films. Whale used influences from these films to create something that is better still, absorbing their key elements and adding his very own touch to it. He leaves much to the viewer’s imagination and it works most effectively when it is not showing certain things.

His characters are strong, vulnerable and eccentric as you would expect from the film, but they are also very sarcastic and humorous, giving The Old Dark House a very own flair—a trademark of James whale’s films. Although often appearing threatening, the characters in the movie will often win over the viewer with a short quip, making the character almost sympathetic for a short while, only to turn them around as the threat they were originally perceived as, during the film’s final act. Like in his other films, the way Whale uses the character’s to play with the viewer’s expectations once again shows his masterful talents. Ernest Thesiger and Eva Moore as the house owners are brilliantly portrayed and presented with dark edges in their personalities that emphasize their brutally dark humor. Never has a simple line like “Have a potato!” sounded so shrewd and menacing as in Thesiger’s delivery in one of the film’s key scenes. Throughout the film, we see that those who appear the most frightening initially, actually turn out to be the most frightened ones and that the real terror is coming through someone different entirely. Altogether, The Old Dark House is yet another perfect example of James Whale’s unique sense of humor and his skills to project it on the screen in the most devious fashion during a time when most other directors were still struggling frantically only to manage the basics of the medium. 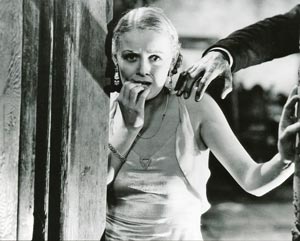 Cohen Media Group has prepared a Blu-Ray version of The Old Dark House offering up a brand new 4K restoration of the classic movie. I have not seen the movie since the DVD release by Image Entertainment in 1999 and clearly, over the almost 20 years since, technology has made tremendous strides. Strides that are visible in every frame, because The Old Dark House looks simply marvelous on this release.

So, how does it look? To put it in a nutshell, remarkable. I had expected some improvements over the DVD version but what we have here is truly a full restoration of the film, beautiful, detailed and absolutely clean. All the blemishes that were part of the DVD version are gone. The is no speckle, no registration jump, no softness, nothing. The image is sharp, incredibly balanced, perfectly reproducing the gothic look of the movie with its deep blacks and wonderful accent highlights. There are none of the ghosting artifacts that plagued the DVD version and throughout, the presentation is absolutely stunning. You watch this and you cannot believe that this film is 85+ years old. My sincerest thanks go out to the folks at Cohen and the restoration team of the movie to give us the opportunity to enjoy the movie in a presentation that is probably significantly better than audiences in 1932 experienced. 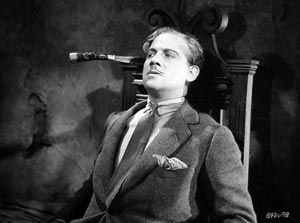 The Blu-Ray Disc features 2.0 presentation of the original mono audio track. The background noise that plagued the old DVD version is also gone, but given its age and the limited technology at the time of the movie’s production, the audio’s frequency response is very limited and narrow. To me, it only adds to the charm of the movie, however, creating a presentation that feels absolutely authentic.

The Old Dark House has no music at all, but unlike many other films of the time, you never really notice the lack. The story keeps going along at a good pace without the low points a number of other classic horror films exhibited.

Like the aforementioned DVD version, this Blu-Ray Disc contains two separate commentary tracks, one very informative one with James Whale-biographer James Curtis who not only attempts to dissect the film and its stylistic elements but also gives some good insight into the classic gothic horror genre and James whale’s influence in general. 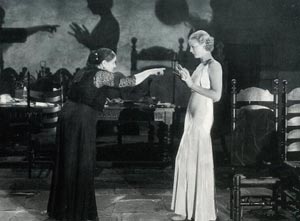 The second commentary track is with actress Gloria Stuart, one of the film’s central figures. Some of you may recall that Gloria Stuart also appeared in James Cameron’s Titanic. In fact, the reason she was cast for Titanic was a direct result of her commentary track for The Old Dark House as James Cameron had listened to her commentary on the Laserdisc a few years earlier and decided that that was the voice he wanted to tell the story of the Titanic. Glorious, how these things go sometimes.

Also included is the documentary Curtis Harrington Saves ‘The Old Dark House’. Intriguing and interesting, it offers some first-handed insight into the recovery of the film and other aspects of Whale’s work.

The Old Dark House is a fascinating film and this Blu-Ray high definition presentation will make a great many people happy to be able to revisit this timeless classic—or enjoy this masterpiece for the first time. I had never expected to see a Blu-Ray release of this movie and I am extremely grateful for Cohen to add this film to their Cohen Film Collection.

As I mentioned before, allow yourself some time to explore and enjoy the film and you will start to see the entire beauty of Whale’s work. Enjoy the settings, the witty dialogues, the edgy characters, the ominous photography and the great, almost theatric performances. For all lovers of classic horror films, this release is one of those rarest gems you simply have to own!