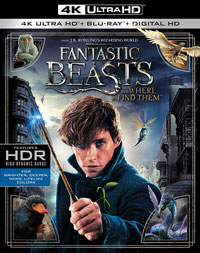 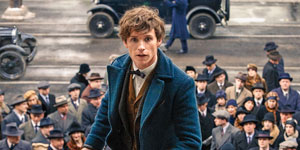 With a new installation in the Harry Potter universe come, naturally, huge expectations. The record-setting franchise is not only beloved by young and old because of its heroes, but also because of the colorful world that writer J.K. Rowling created, perfectly meshing modern day England with an enchanting yesteryear universe full of magic and monsters.

After the completion of the original Harry Potter stories, Fantastic Beasts and Where to Find Them is now showing us an entirely different part of the universe, set generations before Harry Potter was even born.

Magic has been officially banished from the world and all wizards and witches have gone underground in the 1920s. Moreover, magical beasts have slowly been killed, and without a world to roam in, their races are slowly dying off and disappearing. Newt Scamander (Eddie Redmayne) is a young man who nurtures these fantastic beasts. Like a magical zoo keeper, he seeks the creatures out and takes them to a sanctuary to care for them, raise them and breed them.

The search for one of the rarest of creatures takes him to New York City but the moment he sets foot in the New World, one of his beastly travel companions escapes and instantly causes chaos in the city. The stir unsettles the local magic community who had tried for the longest time to keep their existence under wraps, but with evidence of magic suddenly on full display and seemingly threatening in the civilian, non-magic population, Newt becomes the target of various factions.

The peculiar thing is that none of Newt’s creatures actually matches the description or destruction he evidences in New York. This seems to be the work of a much more nefarious magic being and Newt is determined to hunt it down and add it to his collection.

While offering up the same kind of look and flair of the Harry Potter movies, Fantastic Beasts and Where to Find Them is a very different kind of film and story. For the most part, it seemed to me like simply a showcase for Rowling’s imagination. More than half of the movie is dedicated to viewers meeting a wide variety of fantastic beasts, none of which play any actual role in the plot and do not serve any purpose other than establishing the world. Since we are already familiar with that world from the Harry Potter books and movies, it all seems somehow vastly redundant.

As a result, for the longest time, the film has virtually no discernible story. Newt is fumbling his way through New York, stumbling from one magical creature incident to another while the magic council tries to find out who he is. There is some ominousness to it that makes viewers suspect something larger is at work, but it is only in the last third or so of the film that an actual plot develops and a real conflict emerges. I found that aspect of the movie quite disappointing. 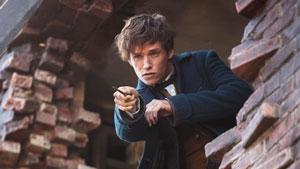 Anyone who expects an adventurous, mysterious thrill ride in the vein of Harry Potter will be sorely disappointed at this menagerie of magic. It is certainly beautiful to look at but ultimately not very rewarding. The film perfectly captures the stylistic elements of the Harry Potter universe and one almost expects Harry to step out of a doorway in some scenes, but in the end, it is the lack of a true narrative that makes the film (and perhaps the story) so much less than it could have been.

From a technical standpoint, this release is at the top of the game. With its colorful and imaginative creatures and environments, the 4K UHD version of Fantastic Beasts and Where to Find Them is beautiful to behold, though not without its shortcomings.

The transfer offers a solid amount of detail but does not really stand out as a 4K UHD title. It never feels as is if image information is actively missing but you can’t shake the feeling that there could be more detail in the image at times.

The brutal black levels do not help either because they give the film the tendency to look very dark—oppressive almost—in a number of instances, giving the film a much gloomier overall atmosphere than its Harry Potter counterparts. I would not be surprised to hear that this was part of the approach to creating a more mature feel for the film, perhaps. That aside, colors are superbly vibrant, without bleeding, and the overall quality of the presentations is still a beautiful thing to behold. Clearly, this release will quickly become a go-to disc for many ultra high definition fans, to revisit again and again. 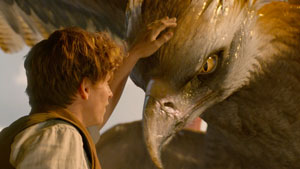 The same is true with the disc’s audio presentation. Coming as a Dolby Atmos and as a DTS-HD Master Audio track, you can only marvel at the sonic explosion in your home theater. Spatial effects aplenty, the surround channels are engaged constantly, and with a wide frequency response, the track creates a soundstage that is wide and transparent at all times. Superior bass extension gives the track the proper rumble to drive home the powerful action scenes, but even during more regular moments, the ambiance definitely benefits from the tracks’ low end.
Dialogues are perfectly integrated and never drowned out by the music or the sound effects.

James Newton Howard’s score conjures up very subtle moments with established Harry Potter themes throughout the film, but they only serve as introduction motifs to set the proper mood. Overall his score has its own identity which I found to be a great benefit to the film. It helps to make sure the film never appears to be a mere imitation or bandwagon rider but instead always ensures that viewers feel they are seeing something fresh and different. Beautifully done.

The release contains a number of bonus features but they are all found on the Blu-Ray version of the film that is also included in the package. Since their number is rather limited, there can be no doubt that this release serves as a first wave only, with a proper collector’s edition arriving some time down the line. 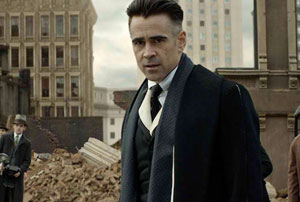 A series of featurettes offers up glimpses at the making of the film and the universe of the film as a whole. Most of these promo featurettes have a theme, focussing on the creatures, the characters or the locations, to lend a bit of additional depth to the production and to showcase the scope of Rowling’s world and movie production that tried to capture it cinematically.

The only other bonus features is a series of deleted scenes that are also part of the release.

I would not want to call Fantastic Beasts and Where to Find Them a bad movie but out of all the Harry Potter films, it is properly my least favorite. The lack of a proper storyline, the lack of drama and mystery really holds back the film and it is only for the grace of the mesmerizing world and its denizens that the movie manages to keep audiences entertained as well as it does. Still, any fan of Rowling’s magical universe will clearly want to own a piece of this and there’s nothing about this release that says you shouldn’t.