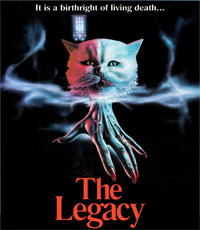 “I wonder what subtle form of manslaughter is next on the program.”
Roger Thornhill (Cary Grant) to Philip Vandamm (James Mason), North by Northwest 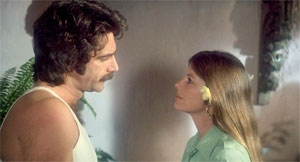 In revisiting 1978’s The Legacy via Scream Factory’s new Blu-ray release, Thornhill’s darkly comic observation kept rolling through my head. Ostensibly born out of the success of 1976’s The Omen, The Legacy is 99.44% pure 70’s satanic conspiracy schlock. The feature film debut of director Richard Marquand, who went on to helm a little indie flick called Star Wars Episode VI: Return of the Jedi and co-written by veteran Hammer scribe Jimmy Sangster, the film has gained in cult status over the years. However, other than catching snippets here and there over the years, until I popped the disc in the tray and hit Play, this was the first time since autumn 1979 when the film opened in the U.S. did I sit down and watch it through, from the Universal logo to the final copyright declaration. The verdict? How about another quote, from poet Olin Miller: “Of all liars, the smoothest and most convincing is memory.”

The film opens on an expansive view of Los Angeles from the hills overlooking the city. Interior designer Maggie Walsh is on the phone, calling to verify the funds of a recently received five-figure check (back when five figures actually had value) from a London-based bank (account #129666!). Convincing her skeptical boyfriend/colleague Pete Danner (a VERY toned and mustached Sam Elliott) to accompany her, she accepts the assignment. While motorcycling in the English countryside, they almost meet their maker in a traffic accident with a stately English limousine.  The limo owner, Jason Mountolive (John Standing), offers the shaken pair a ride to his estate, so they might recompose themselves enough to continue their journey.

Maggie and Pete find that somehow their arrival has been anticipated at the stately manor, and circumstances are seemingly conspiring to keep them there. Soon, other guests start arriving. Each has achieved unimaginable success and wealth in their respective business pursuits. They all also claim gratitude to Mountolive as their patron, evidenced by wearing a certain ring. 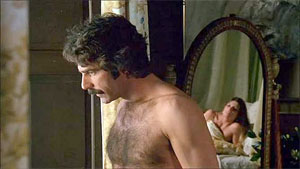 Maggie soon realizes her appearance there is not a coincidence. Through an unknown lineage dating back hundreds of years, Maggie is connected to this black magic cabal. Mountolive, who now is inexplicably presented on life support obscured behind plastic tarp, declares that he is dying and that one of the gathered will inherit all his wealth, but more importantly, his evil powers. As each wonders who will be the ultimate heir, one by one, the guests die under mysterious circumstances. With each death, the survivors begin to wonder if they must take matters into their hands to ensure their survival. The deadly battle for The Legacy has begun!

Sorry for that last bit of histrionic prose, but if there’s a single word to encapsulate the overall style of The Legacy, it’s, well, histrionic. Nothing about this film is subtle. Everything from the direction, to the script, to the plot mechanics, to the performances, is overwrought. Like The Omen, the centerpiece of the plot revolves around a satanic conspiracy and how daily instruments of life can become tools of execution, but whereas that film (at least in the first installment) took great pains to suggest that the accidental deaths could be random acts of fatal consequence, the script here (by Sangster, Patrick Tilley and Paul Wheeler) unequivocally spells out the supernatural influence and actions with the same delicacy one gets when using a jackhammer for a dental cleaning.  Everything is telegraphed miles in advance, down to the smirking faces of the help when they see Maggie and Pete repeatedly attempting to escape. The sterling cast does their collective best to infuse the narrative with some measure of plausibility. Some great British thesps are here, including Standing, Charles Gray, Lee Montague, and Kubrick collaborator Margaret Tyzack as a shape-shifting nurse. I even had a little bit of fun with Daltrey’s turn as a music mogul…before he starts choking on a chicken bone. And, despite three decades’ worth of advancements in the art of graphic on-screen expirations, the “kills” in this film still possess a high grisly quotient, from unblinkingly watching a woman drown, to a botched tracheotomy, to a man immolated and his charred, steaming remains fed to dogs. 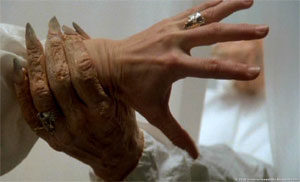 Whatever misgivings I have about the film, there are none to be had regarding the Blu-ray’s technical prowess. Starting with how it looks, Scream Factory turns in yet another respectful 1080p rendition from a newly minted HD transfer, per the back cover. The color palette isn’t exactly candy-hued, but faithfully captures the “muted” look of so many films of that era. Grain is ever-present, actually a bit too ever-present in selected scenes. The source element does exhibit wear, but nothing that wouldn’t be out of place from what audiences might have seen projected 36 years ago. In fact, the HD transfer is so good, the increased resolution reveals all too clearly the limitations of the film’s technical capabilities, specifically one shot involving elaborate prosthetics (something make-up artist Robin Grantham addresses in the supplements).

The DTS-HD Master Audio mono track neither disappoints nor impresses. Not sure what else to say, other than dialogue comes through clean and clear and I rarely found myself riding the volume level to tone down overpowering sound effects or music passages. 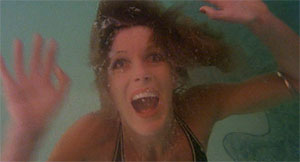 Bonus features are a mix of newly produced and archival materials. On the new side we have “Anne V. Coates: An Editing Legacy,” a marvelous on-camera interview with the legendary, multi-award winning editor. Clocking in around 14 minutes, Anne reminisces far and wide about her career, stories from this film, not only editing but also shooting some 2nd Unit scenes, and even references her son Anthony Hickox (of “Waxworks” and “Sundown” fame) in the chat. “The Make-up Effects of ‘The Legacy’ with Robin Grantham” is an 11-minute video interview with the veteran make-up artist. Robin describes quite clearly many of the challenges and solutions in coming up with the movie’s myriad moments of manslaughter mayhem. (The charred remains? Roast pork.) A theatrical trailer, TV & radio spot and photo still gallery round out the archival (legacy?) extras.

Kudos to Scream Factory, Blu-ray producer Cliff MacMillan and Executive Producer Aine Leicht (the video interviews), in giving fans of The Legacy a respectful Blu-ray release. I just wish I had fonder memories of it.