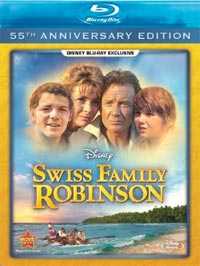 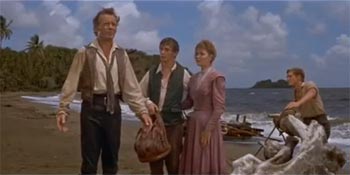 Walt Disney’s 1960 big screen adventure Swiss Family Robinson is one of the best examples of the misunderstood genre known as the American family film. Released at the height of the baby boomer consumer culture, the rousing tropical epic was specifically designed to appeal to multi-generational family members, while mostly avoiding pandering to either end of the “from 8 to 80” audience spectrum. Previously released as a Vault Disney DVD, Swiss Family Robinson is now available on Blu-ray. That’s the good news. The bad news? More on that in a bit.

Adapted from the 1812 novel by Johann Wyss, Swiss Family Robinson begins with a furious storm at sea. A family – Father (John Mills), Mother (Dorothy McGuire), sons Ernst (James MacArthur), Fritz (Tommy Kirk) and Francis (Kevin Corcoran) – find they are the only remaining persons on board. When the ship crashes on some rocks near an island, they go ashore and soon realize they are the only human inhabitants. With parts salvaged from the ship, some elbow grease and some resourcefulness mixed with imagination, the family begins to adapt to their new home, including building an elaborate treehouse. The family even grows when the two eldest boys save Roberta (Janet Munro) from pirates (led by Sessue Hayakawa). Father surmises they will eventually return for their prisoner and devises a plan to create a stronghold that hopefully will repel the invaders.

For all its trappings of family fare, Swiss Family Robinson in 2015 seems surprisingly…adult. Yes, there are the cutesy Disney-esque moments like the ostrich races and celebrating their first Christmas on the island, but the scenes of conflict, whether generated by pirates or dangerous fauna, have genuine dramatic heft. (Caveat: there’s a thin veil of racism in making the pirates distinctly Asian.) Between Ken Annakin’s straightforward direction, John Howell’s inventive production design and the resources of the Disney Studio at full tilt, the narrative doesn’t condescend to its viewer, no matter what age. I’m not spoiling anything (hopefully) when I say the viewer can pretty much guess the outcome, which makes the film the cinematic equivalent of gourmet mac ‘n’ cheese. It may be comfort food, but the ingredients are choice and mighty tasty. And one cannot write about this film without some reference to what is probably the baby boomer generation’s first exposure to custom real estate: the tree house. With its multi-level apartments, “all the modern conveniences” including running water (via rotating coconut shell wheels) and a retractable bedroom ceiling, who wouldn’t think all their problems would be solved if they lived in a tree-bound Xanadu?

To mark the film’s 55th Anniversary, Disney has released the film on Blu-ray. As I said earlier, that’s the good news. The bad? It’s only available as an exclusive of the Disney Movie Club. The DMC is making several Disney catalog gems available on Blu-ray only through the Club, including The Love Bug and Return To Oz, but membership is required, along with a purchase commitment. Not an endorsement; just letting readers know how it’s available.

I will say that the new HD transfer on the Blu-ray is just sumptuous. Bursting with saturated Technicolor hues, the jungle exteriors especially benefit from the resolution upgrade. Remember when kiddie matinees advertised “in Storybook Color!” Well, whether it’s the rich browns of the tree house décor, the azure blue ocean or the dense jungle vines, the details captured in Panavision by cinematographer Harry Waxman get full due here. Film grain is present and appropriately balanced. I briefly compared select scenes from the BD to the 2002 DVD release. In every instance, the new Blu-ray looks sharper, more colorful and, well, just more involving.

The audio is DTS-HD Master Audio 2.0 Mono. Even though the DVD was released in 5.1, this is, after all, a 55 year old soundtrack. While I never expected a full-range audio showcase, the dialogue replicated nice and clear. Music and sound effects never sounded distorted or “congested.” Still, given what was available previously, it would have been nice to have a hi-res multi-channel option.

When it comes to bonus features, I scratch my head in bewilderment. The DVD release was a 2-disc affair with a raft of supplements, including audio commentary by Ken Annakin, behind the scenes featurettes with soundbites from Annakin, MacArthur, Kirk, Corcoran and matte artist Peter Ellenshaw, vintage footage of John Mills and family touring with Walt the new Swiss Family Treehouse attraction at Disneyland, among other goodies. NONE of these are ported over to the Blu-ray. WHY? While I guess it could be reasoned that “the extras are available on the DVD and the DVD is still in print,” that was a bad judgment call and a missed opportunity for a truly Special Edition Blu-ray for one of the crown jewels in the Disney catalog.

As a “no-frills” Blu-ray, the main attraction is the stellar HD transfer. But considering what a consumer has to go through to secure it, coupled with the unfortunate decision to ignore including all the previously created supplements, my recommendation is HEAVILY qualified.