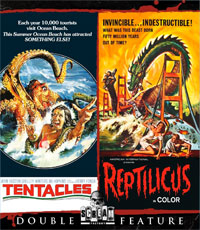 A moment of disclosure: I used to be a reviewer for DVDReview.com. My last review was posted in 2005, when DVD was the “ultimate” home entertainment format and the prospect of a high definition successor was still far in the distance. Much has changed since my last review, including a format war for the next (now current) generation of playback in the home, and another evolutionary turn recently announced with the finalization of the Ultra HD 4K Blu-ray spec. However, I do believe, the more things change, the more they stay the same. For all the great developments in how fans can view and own movies in the 21st century, it still comes down to the axiom: “It’s about the content.” (Refraining from the insult that usually caps that comment.)

As a collector myself, I do share concerns about the slowdown of deep catalog Blu-ray disc releases from the studios. However, thanks to labels like Shout Factory, Olive Films and Twilight Time, obscure but meaningful titles are still getting some physical media love, and hopefully 4K attention down the road with the new format.

Did I say “meaningful?” Part of the joy of deep catalog is revisiting the myriad of guilty pleasures afforded with the hobby. And with Scream Factory’s new “Tentacles/Reptilicus” Blu-ray disc double feature, those in need of a shlock injection will relish twice the dose.

Both films are housed on a single disc. Featuring poster artwork on the front, when you open the case, artwork from each film peers through the clear blue plastic. Nice touch.

Broken down by film:

Tentacles is an Italian-American production released in the States in 1977. Produced and directed by Ovidio G. Assonitis of “Beyond The Door” fame (credited in the film as Oliver Hellman), Tentacles was ostensibly one of the offspring born of the Jaws juggernaut. Sporting a decent cast including Henry Fonda, Bo Hopkins, Cesare Danova, Claude Akins, with John Huston and Shelley Winters as siblings no less, Tentacles had the makings of a decent marine-predator-on-the-loose thriller. In the film, a bucolic California seaside community is beset by a rash of unexplained, gruesome ocean-based killings. Turns out, the nearby undersea tunneling project by the requisite unfeeling corporation has unleashed a giant octopus with an uncharacteristic (for the species) taste for human flesh. Of course, the upcoming sailing regatta with dozens of kids in unprotected sailboats doesn’t help matters. 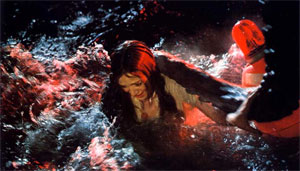 In true Irwin Allen fashion, the film features stars just past their prime, juggling multiple subplots between feedings. Our “villain” (one could argue it’s just fulfilling a basic biological function) is depicted via a variety of techniques, none of them convincing enough to project terror. Without the benefit of Ray Harryhausen animating the evil cephalopod, it’s all mostly flashes of shapes (tentacles reaching out here and there, a bobbing octopus head skimming the surface), quick editing and aquarium-based shots of the real thing.

The 2.35 transfer (Technovision) looks exceptionally sharp and clean. The color scheme is definitely 70s indie cinema, with a muted color palette, which is perfectly replicated here. Source element is in excellent physical shape, with appropriate grain to preserve its film-based origin. There are some instances (especially in the freeze-frames) where dirt and flecks are embedded in the image, which for me verifies how well the transfer preserves the film’s grindhouse pedigree.

Audio is presented in DTS-HD Stereo. While I detected some left-right separation, the audio decodes more like dual-mono. (IMDB lists the sound mix as 4-track stereo, but I can only recall mono theatrical engagements). Dialogue is clean and clear throughout. Sound effects occasionally spike in volume (dig that octopus roar!), but overall the audio is like the video transfer: appropriate and enjoyable. English subtitles are available.

Bonus features include a theatrical trailer (presented in 1.78), a slideshow gallery of lobby cards, photos and poster artwork, and a 60-second spot with a tagline so cheesy — “one of the most gripping suspense films you’ll ever see” – it’s practically a pizza unto itself. 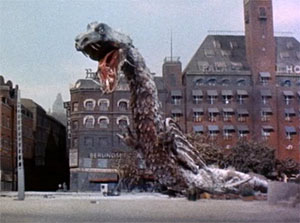 Reptilicus, released in 1961, was Denmark’s answer (apparently its first and only response) to the giant atomic monster film cycle of the 1950’s and 1960’s. Instead of Ray Harryhausen or Willis O’Brien stop-motion, or even Eiji Tsuburaya “suit-mation” of Godzilla and his brethren, Reptilicus utilized inarticulate puppets and generic miniatures to demonstrate the folly of man’s meddling with the forces of nature.

Directed by Sidney W. Pink and written by Pink and Ib Melchior (both alumni of The Angry Red Planet), Reptilicus was shot twice: once in Danish, and then the same actors reciting their lines in English. From what I researched, American International Pictures’ mogul Samuel Z. Arkoff thought the Danish-accented English would not be accepted by domestic audiences and re-dubbed the film with American voice actors. Also, while AIP used the “English” version for the US release, it was edited down from 92 to 82 minutes. The Blu-ray package boasts a new HD master was created for this release. The running time verifies that the Blu-ray presents the 82-minute AIP US cut.

Danish copper drillers in Lapland accidently discover a fragment of flesh while drilling. Not sure of their discovery, they hand it over to the Aquarium in Copenhagen, where it’s kept frozen for examination and research. When one of the scientists accidently thaws the specimen, it regenerates into the monster Reptilicus. With Denmark on the verge of destruction and the potential extinction of the human race a possibility, it will take the combined efforts of the Danish scientific community, the American military, an UNESCO observer and a Danish copper driller to save the world. 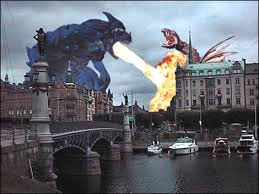 Reptilicus feels like some Danes stumbles onto a Godzilla set and decided to make the best of the situation. Even though the lines are spoken in English, the performers still look like they’re acting in another language. To Pink’s and Melchoir’s credit, the script attempts some plausible methodology in the authorities’ efforts to defeat the prehistoric menace. But too often, we’re subjected to the standard 60s monster movie tropes, like the over-reactionary Military leader, the uber-rational scientist or the everyman copper driller caught in-between. (Ok, maybe that last one isn’t a true stereotype.) Then there are times when the visuals just don’t connect with the intended gravitas of the global threat. When you see the requisite mass exodus from the city, it looks more like the annual running of the Copenhagen Marathon. And when Reptilicus makes shore on a beach full of bikini clad Scandinavian women, there’s the faint whiff of those infamous Swedish “nature” films from the era. Then again, how can you not love a giant monster that vomits projective acid green slime? Final observation: I can’t imagine the film running 10 minutes longer. Even at 82 minutes, it could use some additional pruning of lingering reaction shots.

If there’s any concern about the qualitative aspects of the narrative or performances, you’d never know it from the presentation. In a word, Reptilicus on Blu-ray is SPECTACULAR! I doubt the film looked this good when audiences first saw it on the big screen in 1961. The new HD transfer presents the film in 1.66 aspect ratio. In scene after scene, I was bowled over by the clarity of the image. Colors are rich and saturated, in keeping with the Pathecolor cinematography of Aage Wiltrup. The transfer has occasional issues, including two instances with registration problems, one hue shift (around the 1 hr, 5 min mark) as well as excessive grain (with a persistent grain sheen throughout) and soft focus in many of the process shots. I bring all this up, not as a slam against Scream Factory’s technical crew. On the contrary, I believe they’ve accurately preserved the anomalies inherent in the original source elements – what audiences saw projected five decades ago. 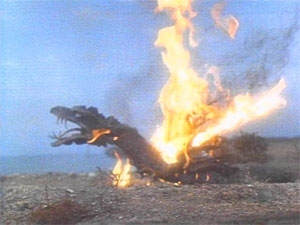 The DTS-HD Mono audio isn’t quite as revelatory as the transfer, but the soundtrack perfectly complements the picture. Dynamic range isn’t great, but rarely did I hear distortion or excessive hiss. Music, from composer Sven Gyldmark, and sound effects are nicely blended.

Extras mirror what was provided for the previous feature: a theatrical trailer (presented in 1.33 and gloriously old-school in its hyperbolic proclamations); a slideshow gallery of photos, posters and lobby cards; and a 60-second radio spot.

Fans of Reptilicus will rejoice with Scream Factory’s new Blu-ray release. Kudos to disc producer Cliff MacMillan for the great job he did in giving the cult film an HD facelift. And if you’re a fan of Tentacles…good for you!