“As Above, So Below” is an inventive and genuinely frightening horror film that is almost entirely undermined by its adherence to the increasingly tiresome conventions of the “found footage” subgenre. It tells the story of a group of explorers searching for the philosopher’s stone, which allegedly has the power to turn base metals into gold; their hunt takes them into the catacombs beneath Paris, where six million bodies have been buried and which, the explorers discover a little too late, seems to be a source of supernatural evil.

Brothers Drew and John Erick Dowdle mine a lot of honest scares out of this premise in their screenplay, coming up with both creeping external imagery and backstories for the characters that allow for some psychologically unsettling moments. Once the movie gets rolling there are a lot of spooky moments, and they’re fairly inventive – not just the cheap jolts one gets from so many horror movies (especially found footage horror movies) these days. 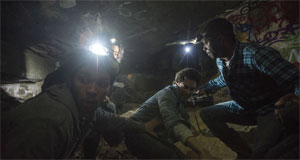 Yet ironically, “As Above, So Below” is so close to being great that the fact that it falls short is more disappointing than if it had been just another run of the mill horror flick. The big problem is that the found footage clichés are just so played out; the whole movie is told from the point of view of cameras the characters are either carrying or have attached to their heads, and this leads to a lot of jerky, incomprehensible movements and a lot of clunky moments in which characters have to justify why their cameras are on or shooting in certain directions. It’s a particularly distracting problem in the film’s opening half-hour, before the suspense really kicks in; the first act is filled with silly scenes in which characters film each other for no real reason, a device that makes it hard to get lost in the film and that insults the audience’s intelligence to the point that this viewer was about to give up on the film just before it started to pick up. 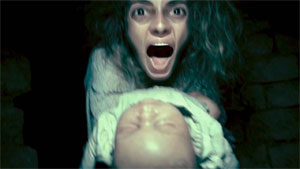 That would have been a mistake, since, for the most part, the second half of “As Above, So Below” does redeem the insipid found footage clichés of the first half. Yet I still couldn’t help but fantasize about how much scarier and more affecting the film would have been if it had just been shot straight – why does shaky-cam and intermittent video noise signify “reality” these days? Devices like the ones on display in “As Above, So Below” and so many other found footage movies are becoming increasingly silly the more they’re used, but it doesn’t seem like filmmakers plan to discontinue them anytime soon. In the Dowdle brothers’ defense (John Erick directed the film from his and Drew’s script), perhaps the fact that they actually shot in the Paris catacombs made a more traditional approach impossible – it’s not like you can get dolly tracks or cranes down there – though I still think the movie would have worked better if the initial above ground scenes had been shot in a less distracting, more classical manner. 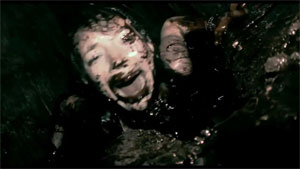 Nevertheless, at the end of the day the pluses outweigh the minuses, making “As Above, So Below” well worth a look on Blu-ray. The transfer is excellent, with unerring clarity in spite of the consumer-cam look and surprising detail in the blacks. This is a movie that could easily become unwatchable in anything less than a perfect transfer since it’s so underlit, but Universal has done well by the cinematography on this disc.

The DTS-HD sound mix is strong as well, using ambient effects to their maximum potential to create an eerie, unsettling soundscape.

Unfortunately, when it comes to extras the disc is a complete dud, offering only a four-minute promotional featurette that adds nothing to one’s appreciation of the film. Given the unusual circumstances of the production, it would have been nice to get a more in-depth documentary on the technical challenges of shooting in the catacombs, but the film itself is strong enough to make this Blu-ray worth a look.