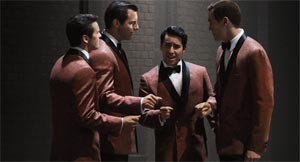 Clint Eastwood’s “Jersey Boys” is a fascinating companion piece to an earlier Eastwood film with which it might not seem, at first glance, to have much in common: his 1995 romance “The Bridges of Madison County.” The films aren’t particularly similar in terms of tone or style or even subject matter, but they both present the same problem to a filmmaker: namely, they’re both based on source material that, in its original form (the stage for “Jersey Boys,” the page for “Bridges”) was so wildly popular that to alter it in any way would be to infuriate legions of fans, yet both are so specific to their respective mediums that a straight adaptation would be impossible. In each case, however, Eastwood managed to pull off some kind of cinematic alchemy, transforming the original material into cinematic gold without either sacrificing the work’s initial appeal or succumbing to its limitations. One of the most amazing things about “Jersey Boys” is that it is simultaneously a relatively faithful adaptation of the play and a film specific to Eastwood’s obsessions and preoccupations—and it works beautifully on both levels. 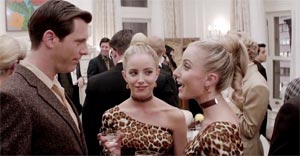 “Jersey Boys” tells the story of the rise and fall of Frankie Valli and the Four Seasons, the popular all-male singing group of the 1960s that rose from the streets of New Jersey to score hits like “Walk Like a Man” and “Big Girls Don’t Cry.” On the stage, it’s a run of the mill musical biography that nevertheless managed to become a smash thanks to audiences’ nostalgia for the music. Eastwood retains the core events, dialogue, and (of course) songs, but simply via his visual style transforms them into something darker and more complex. He takes the opposite direction of what one might expect for a show business musical, applying his signature style of dark shadows and desaturated colors to the material to create a kind of musical noir. This approach brings out the contradictions in both the characters and the story, undermining the play’s sense of nostalgia by pointing out how unreliable memory is—the movie constantly shifts points of view between characters whose memories might or might not be trustworthy. 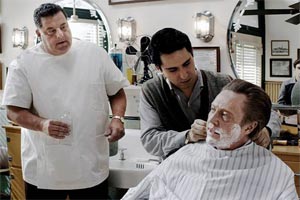 The concept of four young men forming a singing group also allows Eastwood to explore one of his favorite themes, the appeals and weaknesses of masculinity. The stage musical presented the characters’ sexism as a kind of cute affectation to be justified and enjoyed, writing it off as simply behavior of the period, but Eastwood doesn’t let them off the hook so easily. He unblinkingly shows the men’s total inability to respect women or understand them, making their Jersey strutting look ridiculous at best and distasteful at worst; if relating to a woman is one of the key components of being a man—and we know from “The Gauntlet,” “Tightrope,” “Sudden Impact,” “Heartbreak Ridge”, and dozens of other films that Eastwood thinks it is—the Four Seasons are all failures. Not that they relate that well to each other, either; in the end Frankie Valli is no less an alienated Eastwood loner than Dirty Harry or The Man With No Name. 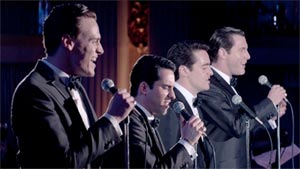 That Eastwood explores all of this while still retaining the stage play’s peppy energy is a testament to his mastery as a director (and to the infectious quality of the original music). “Jersey Boys” is highly entertaining regardless of its deeper philosophical musings, and it looks and sounds great on Warners’ Blu-Ray Disc. Eastwood’s stripped-down palette is impeccably preserved, with the challenges of his low-key lighting well met by the hi-def transfer.

The DTS-HD 5.1 soundtrack is solid as well, taking full advantage of the surround channels to showcase not only the music but the film’s razor-sharp dialogue recording and subtle sound design. 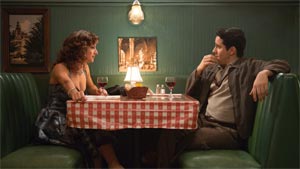 The disc falls a bit short on the extras, providing only three extremely superficial featurettes: there’s a 23-minute making-of documentary entitled “From Broadway to the Big Screen”; a five-minute featurette on the casting of actor Donnie Kehr; and another five-minute piece on the shooting of the film’s closing musical number. These are mildly enjoyable puff pieces that do little to enhance one’s appreciation of the film or to provide insight into its making. Then again, the movie itself is so satisfying and so well presented on this Blu-Ray Disc, why quibble?