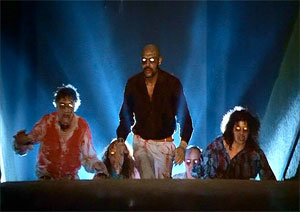 Lamberto Bava’s 1986 horror film “Demons” has long been a fan favorite with its energetic tone, the colorful visuals and the buckets of blood. Synapse Films now makes the film available on Blu-Ray once again, after releasing a strictly Limited Edition Steelbook version last winter. Being hailed as a movie-only version, this release has nonetheless received a new color-correction pass and I was truly eager to check it out.

Invitations are handed out on the streets of Berlin, Germany, for patrons to visit the Metropol theater. No indication is made as to what to expect, and as visitors arrive, it becomes clear that it is a newly re-opened movie theater. Tonight’s opening presentation is an unknown and untitled horror film. The film shows a group of teenagers digging around the ruins of an old chapel, only to discover the grave of Nostradamus and unleashing an age-old curse. One that allows demons to rise from the underworld and walk the earth.

Incidentally, some of the events of the movie are mirrored by some of the theater patrons, and very soon the audience realizes that the images they see on the screen might hit much closer to home than they had anticipated. The curse is unlocked and demons unleashed, which take possession of their victims and turn them into a horde of killing, walking corpses. 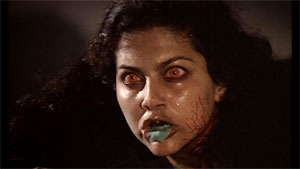 “Demons” is a head-on child of the 80s. It is a stereotypical horror flick of the era, bearing all the marks audiences were expecting at the time, including a thin – almost hair-raising – storyline, bad dialogue, overacting ham actors, lots of make-up effects, but also some of the coolest music to grace the screen. To the ominous lyrics of Mötley Crüe’s “Save Our Souls” the plot foreshadows the imminent arrival of the demons, to the hammering beat of Pretty Maids’ “Night Danger,” the demons first ravage the interior of the movie theater, only to come to a climax during the thundering double-bass inferno of Accept’s “Fast As A Shark.” You get it. This film is heavy metal pop culture of the 80s and therefore it is no wonder that I fell in love with this film during its original tenure.

While the plot may be weak and illogical, it never bothered me much, because the atmosphere and the breathless pace of the action sequences – much of which can be attributed to the driving music – make you forget about everything else. The fact that the film is never pretending to be anything more than a fast-paced splatter flick makes it so much fun to watch and allows viewers to simply sit back and let the movie—and the blood—wash over them. 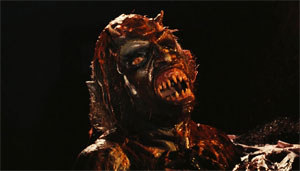 Director Lamberto Bava is the son of the acclaimed classic horror director—maestro one is tempted to say—Mario Bava, and it shows. Mario Bava was one of the greatest black-and-white horror masters, conjuring up incredible atmosphere with shades of gray. Lamberto has learned a lot from his father, and many of his films drip with atmosphere. “Demons” is no exception in the regard. Awash with rich colors—red and blue tones mostly—the film is a phantasmagoric experience that uses colors and music as a canvas to project its story on. The approach makes the film much more artistic than it may appear on its gory surface. It is quite an exciting film and although it may not be as impressive today as it was almost 30 years ago, I still thoroughly enjoyed the thrill ride for the umpteenth time around.

Presenting the film in high definition for the first time, Synapse Films has created a new transfer of the movie, restoring its original 1.66:1 aspect ratio. The print they used is clean and clear, and absolutely free of defects or blemishes. It allows the presentation to revel in the movie’s color and detail. Definition is generally good, with little noise and grain, but at times, the image appears a bit soft. I suspect that it may be a technical limitation of the original film stock or the way the film was shot. Aside from that, however, this is a great-looking presentation that vividly reproduces Bava’s color play and ensures that every drop of green demon blood that mingles with the red of the humans’ is becoming a feast for the eyes on every possible occasion. Black levels are solid and deep, giving the image good visual depth. 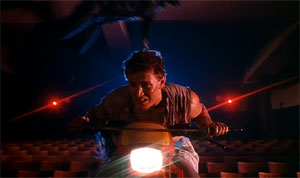 To my surprise, the release does not feature the 5.1 remix that was part of Anchor Bay’s previous DVD release of the movie—most likely a result of contractual issues—and instead, the Blu-Ray Disc features the movie’s original mono audio track. It is, however, presented in a DTS HD Master Audio format that is absolutely free of hiss of distortion.
The International English audio track is also included in DTS HD Master Audio format, offering a stereo alternative to the original mono track.

On a side note, I think it is important to point out that the film is dubbed in its entirety—remember this is an Italian production—and while the dialogue is very understandable at all times, the dub itself will make you cringe at times. But hey, it’s all part of the fun.

As an extra, the release contains only the movie’s theatrical trailer. As I mentioned in my opening, the release is deliberately released as a movie-only version. If you are looking for bonus materials, you may want to try to dig up one of the Steelbox versions on eBay or so.

“Demons” is not a great movie by any means but it is the perfect late-night horror fest or Halloween night movie. It is a guilty pleasure par excellence, though. It is one of the great over-the-top 80s horror flicks that flood over you with images, gore and music. It is by far better than many of its competitors of the period and always deserves a viewing.