I admit it. The “Blind Dead” movies are a guilty pleasure of mine. Have been, ever since I was a teenager. Part of it may have to do that “Tombs Of The Blind Dead” was the first real horror movie that I ever saw in a movie theater on the big screen in all its gory glory. Little did I know or care back then that this was a super-cheap production or that the film was really not that great. What caught my eye back then—and still does—is the movie’s atmosphere of dread and its striking visuals, particularly during the graveyard resurrection scene.

The “Blind Dead” films have been released before, and just to make sure there is no misunderstanding, “The Complete Blind Dead Saga” as it is presented on four discs here by Blue Underground is not a remaster of any kind but a repackaging of “The Blind Dead Collection” the studio released back in 2005—alas without the fifth disc that originally featured some incredible bonus materials. Still, since the collection has been out of print for some time—hard to imagine it’s been almost 10 years since its release—and since there are still many fans out there who have not had the chance to purchase these Spanish horror films, Blue Underground’s decision to re-release the films unaltered makes sense, particularly in the light that the rights for these films are currently in a state of flux, making it impossible for any studio to produce new transfer, bonus materials or high definition releases. It is a shame, really, because I know that Blue Underground does have high definition transfers of these films in their vault but has its hands tied when it comes to potential Blu-Ray releases. 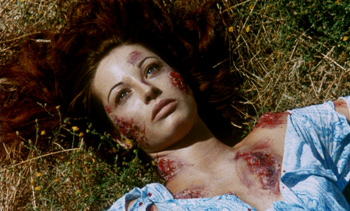 The Blind Dead series started in 1971 with “Tombs Of The Blind Dead” as a ghost story in which the ruins of an old monastery are haunted by the ghosts of its previous inhabitants, the Knights Templars. These knights, portrayed here as marauding crusaders who were said to have found the secret to eternal life. To ascertain it they had sadistic blood rituals during which they made human sacrifices—pretty virgins, of course. The villagers nearby decide to take things into their own hands and hang the knights, but not before those swear to return from their graves to take revenge. As we fast-forward to the present, when a tourist camps out in the ruins, the ghosts of the Templars rise from their graves and indeed take revenge, hungry for ever more blood and ever more bodies.

In the sequel “Return Of The Evil Dead” the Templar Knights once again rise from their tombs to take revenge on the villagers that once killed them. During the celebration of the anniversary of the event in modern times and with the help of a human sacrifice, the rotten marauders return on their undead horses, ready to slay everyone within earshot.

The Knights Templar take to the seas in “The Ghost Galleon,” the third film in the franchise, in which a group of stranded swimsuit models discover the ghost ship and its gruesome contents—the coffins of the undead Knights Templar. Little do they know that once the undead knights rise from their coffins there will be no escaping them.

The knights made a final showing in “Night Of The Seagulls,” in which the villagers of a small coastal town are making human sacrifices every year in order to keep the undead knights away. But during this particular night the Templar Knights can no longer be placated and begin to feast on all the human prey they can get their claws on. 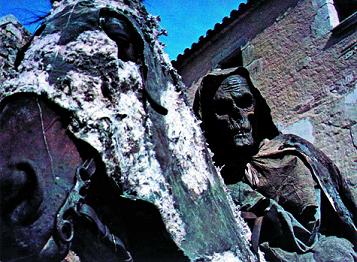 The Blind Dead movies are not very good, really, but they are definitely cult material, and they are so for good reason. There is something about them that gives you goosebumps despite their low budget and technical shortcomings. The stories do not always make a whole lot of sense and the acting is also not always as good as you would hope. Further, the plots are truly hair-raisingly convenient all the time. It would be so simple to evade these shambling creatures. As the title suggests, they are blind and rely on their hearing to locate their victims. And yet, the people in the film just have this tendency to constantly scream to get noticed and then run themselves into corners they can no longer escape.

The creatures themselves could also be destroyed rather easily with a torch or beaten to the floor with a few chops, and yet no character seems to really figure this out and obediently waits—petrified by their horror supposedly—until the creatures’ rotten teeth sink into their flesh. And running? What about that? Well you can run as fast as you want, but the knights are always faster than you are, somehow taking shortcuts through thin air and they always having their undead steeds available as if pulling them out of their armors’ pockets. Well, I guess you see what I’m getting at. And yet, I love these films.

So, what makes them so cultish and still enjoyable? Their production background and their atmosphere. The images of the fog-shrouded graveyard with bony fingers poking from the graves, the moving tombstones, the shadowy hooded cloaks, the slow motion photography of the undead moving and riding, all that and more create a truly ghostly atmosphere that is hard to beat.

As for the production background, director Amando De Ossorio shot with miniscule budgets and made these films during his vacation time over the period of 4 weeks, each, start to finish. Because he didn’t have money to hire real actors, he essentially hired small unknown amateurs to star in these films. He did the design of the knights himself and simply shot the films on location as quickly as he possibly could. In many ways it reminds me of the way Ed Wood made his films, particularly in the light that some of the films were truly teetering on the brink of his personal bankruptcy. You simply have to admire that kind of commitment and enthusiasm.

Thematically, De Ossorio explored new territory also, particularly for Spanish filmmakers. Coming out of the Franco-era there was a sense of liberation throughout Spain at the time, and the films reflected this nicely. The blood and violence, the sadism, the lesbianism and the sex, it all was material Spanish audiences weren’t used to seeing, and they responded to it well enough to make “Tombs Of The Blind Dead” a success. As a result De Ossorio was commissioned to make a sequel, but once again, with a tiny budget that hardly covered the actual requirements. Therefore he reused a lot of the Templar Knights footage from the previous film and shot only what additional footage he needed. The same thing happened for the next two films as well, where the director kept recycling footage over and over again ad nauseam. Despite their overall success, sadly the studio never gave De Ossorio a budget big enough to really make these films great—much to his dismay, and to that of his fans. 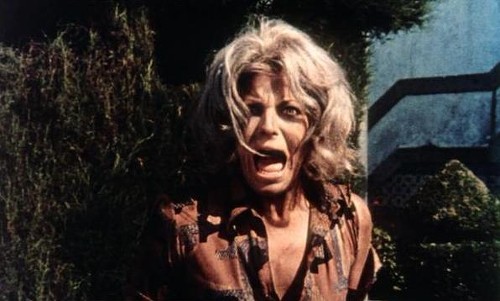 De Ossorio has discussed the films very candidly before—in particular on the bonus disc that was part of “The Blind Dead Collection” released in 2005, and makes no heed that he thinks they are really bad. He discussed there the limitations he constantly ran into and how special effects had to be done a certain way, only because they simply couldn’t afford any more. He was very pragmatic in his work but despite his best efforts the films never turned out the way he had envisioned them to be, due to all the limitations and constraints.

In this 4-disc DVD set each of the films is presented in its original widescreen aspect ratio in an anamorphic transfer. Each disc contains two versions of the respective film—the theatrical US version as well as the uncut, uncensored original Spanish version with English subtitles. I suppose I don’t have to tell you which version to watch, as the US versions are not only crippled in content and length, but have oftentimes also been re-edited.

The image quality is a bit of a mixed bag, though. While the transfers are clean and virtually free of any speckles, the image looks soft and a tad blurry many times. Given Blue Underground’s stellar track record and dedication I can only assume that the source materials that were available were simply flawed by these limitations. Some of the footage is very grainy —especially the night time shots and the ones that were heavily processed, such as the day-for-night sequences. This makes compressing the material hard, and sadly the transfer often loses fine definition and textures as soon as the camera is in motion. Some slight edge-enhancement is also evident a select shots but it is never distracting. Clearly, this is still the best home presentation that has ever existed for these films but sadly it is not as stellar and sharply defined as one might have expected.

The audio on the release comes in the form of the original mono tracks in English and Spanish for the respective cuts. The audio is clean and clear and is free of hiss or distortion. While the frequency response is limited, the overall presentation is good and fully serves the picture. Dialogues are well integrated an always understandable.

Each of the films comes with its trailers and a photo gallery featuring poster art and still images. “Tombs Of The Blind Dead” also contains an alternate opening sequence while “Ghost Galleon” also contains radio spots.

Guilty pleasure or not, “The Complete Blind Dead Saga” is a very cool release for some 70s landmark horror films that came years before the late-70s zombie-craze. (Interestingly these films were revived during the post-Romero zombie-wave and actually made a second run in theaters at the time, further adding to their success.) Blue Underground did a great job putting these films on DVD. For fans of the movies, and for anyone interested in 70s Euro-horror, “The Complete Blind Dead Saga” is a release you should not overlook. This is classic cult horror at its peak.