It is hard to believe it’s already been fifteen years since the release of Disney’s “Tarzan,” but I remember very vividly that the movie was setting a new milestone for the use of computer-generated imagery in Disney’s animated movies.Now, the studio has prepared a high definition Blu-Ray version of the film and I simply had to check it out.

Like so many of the Disney animated features, “Tarzan” is based on a famous literary work, in this case being “Tarzan, Lord of the Apes” by Edgar Rice Burroughs. The story opens with a family, a man, woman, and baby, being shipwrecked (off of the coast of Africa we later learn) and moving into the jungle. This story is intercut with the story of a group of gorillas, specifically Kala (voiced by Glenn Close) and Kerchak (voiced by Lance Henriksen), the group’s leader. We see a leopard attack the gorillas and kill some of the young. Meanwhile, the human family is building a tree-house and lives quite well in the jungle.   One day, Kala goes exploring in the jungle and hears a strange sound. She follows the sound and comes across the treehouse, which has been ransacked. Inside, she finds traces of blood, the bodies of the humans and… the baby. Alive! But she also encounters the leopard and after a harrowing battle, she rescues the baby and takes it back to her group of gorillas. Kala decides to raise the baby as her own and names it Tarzan.   As Tarzan grows up and fights to find his place among the gorillas, he befriends a smart-ass gorilla girl named Terk (voiced by Rosie O’Donnell) and an obsessive-compulsive elephant named Tantor (voiced by Wayne Knight). Despite the love of Kala, and the playfulness of his friends, Tarzan still feels different. That is, until Jane arrives.   The adult Tarzan (voiced by Tony Goldwyn) discovers Jane (voiced by Minnie Driver), her father Professor Porter (voiced by Nigel Hawthorne), and their slimy guide Clayton (voiced by Brian Blessed) exploring the jungle. After Tarzan rescues Jane from the terrors of the jungle, and thus, having his first contact with other humans, he realizes that he’s not a gorilla and must choose between the jungle or the world of humans. Meanwhile, Clayton is devising a plan to exploit both Tarzan and his gorilla family. 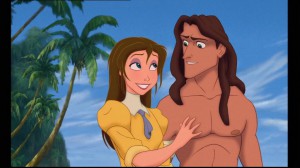 “Tarzan” is a wonderfully rich and colorful movie and with the help of computers animators were liberated of the limited camera moves of old. Instead, the film revels in dramatic and staggering camera slides, pans, rolls, occasionally even putting the viewer in a first-person perspective.

But aside from the eye candy, the film also features a solid foundation in terms of the way the story is told. The first ten minutes of the film, featuring the shipwreck and Kala’s rescue of baby Tarzan take place with no dialogue, accompanied only by Phil Collin’s beautiful soundtrack, and the effect is amazing. Despite the fact that you know Kala is going to rescue the baby, the battle between the gorilla and the leopard is very well done and provides the thrills it sets out to offer. The way that this opening draws you into the film is similar to the beginning of “The Lion King,” but instead of offering an emotional high at the beginning, “Tarzan” gives you an adrenaline rush.   This action-packed opening gives way to a film that barely takes time out to breathe. “Tarzan” is wall-to-wall action scenes, involving chases, fights, rescues, and vine swinging…lots of vine swinging. “Tarzan” may be a little short on plot, but for the most part this is not a bad thing in this case, because it gave the Disney animators the opportunity to revel in the world around the story. 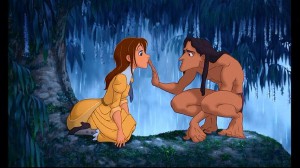 As I mentioned before, the film was a major step in combing traditional animation with computer generated imagery, and instantly you will notice that the film looks so utterly clean, sharp and defined that it becomes truly striking. The jungle setting in particular has allowed the animators to bring in a wide palette of lush colors, besides just the green of the trees, giving the film a staggeringly beautiful look and this high definition transfer makes sure to bring out every last detail with uncanny precision. Colors are lush and vibrant, but never bleed. Instead, the screen is awash with all imaginable shades of greens and swatches of colors from the entire visible spectrum. Lines are incredibly well rendered with even hairlines showing up perfectly at all times, giving the film in incredibly defined look.

The transfer on the disc presents the movie in a 1.78:1 aspect ratio, which is slightly wider than the movie’s original 1.66:1 aspect ratio. It is devoid of any blemishes or defects at all. It is an incredible transfer and it is hard to put into words the level of detail and definition found in this release.
The release features a DTS 5.1 HD Master Audio track, which is a deviation from how the movie was shown in theaters, where it was originally presented with a 5.0 track. Fortunately for us, technology has progressed and the 5.1 mix found on this release does a great job expanding the audio spectrum with a gorgeous, dedicated subwoofer channel. The surround mix is fabulous, with the ambient sounds of the jungle filling the room from all directions. The music score is clean and clear, while dialogues are always perfectly mixed and understandable. 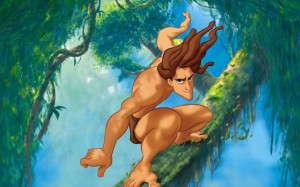 “Tarzan” also dishes out a few solid bonus materials, including a selection of deleted scenes along with the “You’ll Be In My Heart” music video by Phil Collins.

A “Research Trip to Africa” featurette and some “The Making of the Music” footage is also included on the disc, along with a DisneyPedia feature on the subject of “Living in the Jungle.”  “Tarzan” was a milestone for Disney animation and it still shows. When you compare it side-by-side to the animated features that came before, such as “Hercules” which was created only two years earlier, the visual improvements are staggering. The film rang in a new era for traditionally animated movies as a whole and it is easy to see, why.

The film is fun and exciting from beginning to end, and this Blu-Ray presentation is the perfect platform to show off both, the quality of the film itself, as well as the quality of your high definition home theater. With staggering, vivid and highly detailed images and a killer soundtrack to boot, “Tarzan” is a release that needs to go into any animated movie fans’ collection.