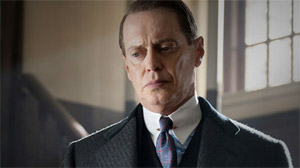 I’ve been hooked on “Boardwalk Empire” since its first season, and I thoroughly enjoyed the mix of Prohibition-era mobster movie and crime drama, despite the excessive violence and the gratuitous sex. I was therefore really looking forward to this fourth season when HBO sent along the Blu-Ray version for review.

As season 3 concluded an incredibly powerful season, Nucky Thompson (Steve Buscemi) finds himself ousted from his powers in New Jersey. As a silent partner, he runs the Onyx Club with Chalky White and no longer operates out the Ritz. A small seaside hotel must do the job. But he is determined to continue to make money, and despite the bad blood and the betrayal witnessed in the previous season, Nucky is willing to bury the hatchet with his enemies, in order to expand his business.

He finds new opportunities in Florida, where bootleggers can easily bring in alcohol from Cuba, but in order to start up that new venture, he needs a wealthy partner he can trust. It is but the first obstacle in this risky new venture, but it also teams him up with Sally (Patricia Arquette), strong woman that is just to his liking.

Meanwhile, Al Capone (Stephen Graham) is expanding his reign as well. One small step at a time, he begins to cut out Johnny Torrio out of the day-to-day operations, making decisions more independently. But heated as he is, his agenda is always on the violent side, and he recruits Dean O’Banions muscle, the former agent Van Alden, for his purposes, trying to get close to O’Banion for the kill. 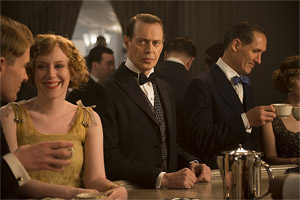 And while they are all busy, working their numbers and scheming, the newly-formed Bureau of Investigation under the direction J. Edgar Hoover has placed an agent right in their midst. Unbeknownst to them, the undercover man begins to obtain information and steer their fates, all with the single goal to bring them all down.

Despite the cool premises and plot lines, I could not help but feel that this fourth season of “Boardwalk Empire” was anemic and a bit toothless. For some reason, the suspenseful drama, the crime aspects and the conflict that used to propel the show forward and hooked viewers was almost entirely missing from this season, replaced by some strange lulling sense of philosophy, even the season’s new nemesis Dr. Narcisse, played by Jeffrey Wright, is a pseudo-intellectual sleeping pill.

I am not sure what compelled the writers of the show to abandon the previous formula, which was so successful, and favor such a slow, overly character-centric approach that brings the show’s pace to a crawl. 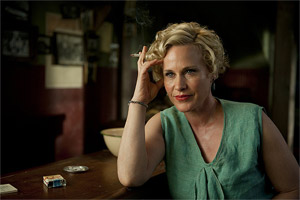 The 1080p high definition transfer found on this release is meticulous and top notch. Clean and free of any blemishes or defects, the transfer brings the show to life in every frame, conjuring up the colorful backdrop of the Prohibition era with warm, smoky clubs and the harsh world outside. Colors are faithfully reproduced and the transfer’s solid black level give the image visual depth and deep shadows. Steeped in contrast, the presentation is every bit as good as you’d expect and is without flaws or compression artifacts.

The same is true for the DTS 5.1 HD Master Audio presentation. Making constant use of the surround channels for ambiance and effect, the show is a cool mix of energetic scenes and subtle environmental effects. The music is clear and warm and dialogues have been mixed just right to remain understandable at all times. 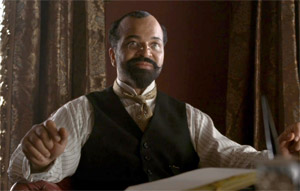 A number of bonus materials can be found on “Boardwalk Empire: Season 4,” such as audio commentaries on selected episodes. They feature cast and crew members and shed additional light on the production of the show, as well as motivations and intentions of the charcaters. The commentaries also help provide more historical context and information about the world in which these charcaters moved.

If you need to get kickstarted on the events that preceded this season, you will find a 14-minute recap by the show’s creator and writer on the release, titled “Season 3: Revisited.”

There are also a handful of featurettes to be found as part of the set, such as “New Characters,” which takes a look at some of the characters that are taking the limelight in this season, such as Dr. Narcisse, the “other” Capone Brothers, Sally Wheet, and Daughter Maitland, of course.

Also focussing on character is the featurette “Becoming Harrow,” in which actor Jack Huston discusses the character Richard Harrow he’s playing, in quite some depth. Not surprisingly, the character of Richard Harrow has become one of the show’s most beloved characters because of the way he is exhibiting the multiple facets, being a soft-hearted person, who is a ruthless hit man and killing machine at the same time.

“The Onyx Club: A Step Back In Time” is another featurette, taking a look at the production design of the season’s main set piece. You will find out more about the creation of the set, a well as the inspirations the creators drew from to build the place from the ground up. 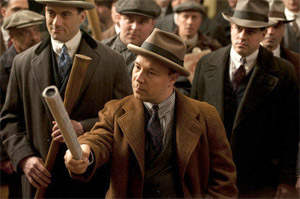 In addition to these featurettes, the release also contains “Boardwalk Chronicles,” an in-movie feature that allows you to keep track of the characters and locations, putting it within historical context at the same time.

“Scouting the Boardwalk” is feature available in each episode that allows you to trace how the show’s locations manager found inspiration in unique buildings and structures that led to his creation of the 1920s you witness in the show.

“Boardwalk Empire: Season 4” was clearly a step down from the previous high octane season, and the new direction may not please fan of the show. I found it too slow for my taste, too self-conscious oftentimes, as if desperately trying to be different from the past seasons, while losing its core appeal. Even the season finale was most anticlimactic. I am undeterred and looking forward to the next season, which will also be the show’s final season, but my anticipation of the events has been notably dampened. Still, in terms of visual style and classiness, it is hard to beat this show, and the characters themselves are definitely intriguing. Just ramp up the pace and the action a bit next time around!